21 March. Savannakhet to Phueng Daet.
Bit of a recovery ride today. Just as well as crossing the border took some time. More than I thought.
I brought some food (rice and pork) and Sat with a guy who kept bringing me more food!     Salad, fish, more rice and water. I offered to pay but he said no. I spent at least 45min talking to him. Well kind of, we couldn’t understand a word each other was saying.
I tried to change some dollar I had with me but again the bank wouldn’t. Ended up changing it at a jewellers. ( any gold smith will exchange money, and at a more than fair rate).   The guy in the jewellers told me his son owns a coffee shop up the road and I should go, so I did. Pretty cool place actually and good coffee. Obviously all this took time. 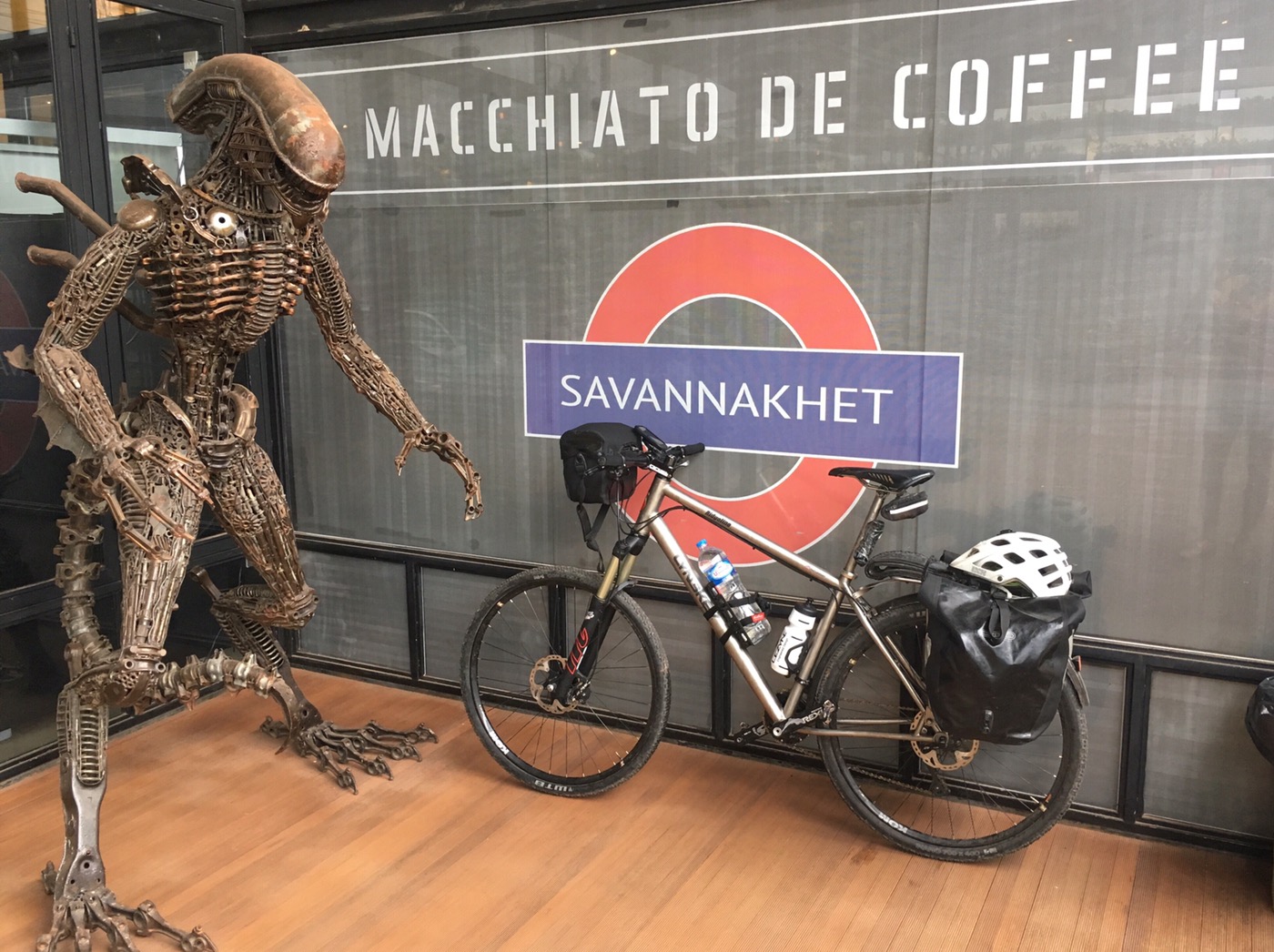 I ended up riding to the border about 3pm. I was told that in order to cross the Thai/Laos friendship bridge between the two countries I would need to get the bus. The road was apparently too narrow, far too dangerous for a bicycle or moped for that matter.  I really couldn’t be bothered to take my bike to bits so tried to bribe the police man but to no avail.  I think he liked the fact I tried.   Ended up getting bike on bus after the usual form filling and driving to border control in Thailand.   One more small form and I was free to ride again.  No money to pay for entry this time?!
I rode for 40 odd kilometres looking for a place to stay but couldn’t seem to see anything.  It started to get dark and then started raining hard.  This was not looking good.  Eventually I found some funny looking shed type buildings.  A little weird as you can see from the picture but I was more than happy to call it a day and crash out.

Started cloudy which was nice but got hot about 11am. Set a good pace and arrived in good time. I’ve spent hours and hours on the road alone. Plenty of time to think. Which reminded me……
Some people have asked me what I think about when I’m cycling for six hours a day on my own. I think about everything and sometimes nothing. I think about my daughters, my family, my friends. The people I’ve met, the people I’ve said goodbye to, The job I don’t want when I get back, How long I’ve been riding, how many kilometres I’ve covered. How many more kilometres to lunch, why is my belly still fat – I’ve been cycling for days.  Sometimes just get into a rhythm on a big climb and in a sick way enjoy the pain.  I think about getting to Nepal and meeting my ex-wife there, (yes that is happening). The very reason I left the UK is now the very reason I’m going back to the UK.
Today I thought about ironman in amongst all my other thoughts.  Ironman is absolute bullshit, okay his suit may protect him from bullets etc but it won’t protect him from being smashed into the ground at 1000 ft per second.   I don’t care what suite you wear, it could be a £1500 Armani suit you’re not gonna look cool after that!  it’s the same principle as smacking your head against a brick wall. Your brain hits the inside of your skull and is smashed.  it’s the same thing with Ironman’s suit! He would be dead!  I can’t believe I actually thought for a moment he would be fine.  I’m glad I had time today on the bike to think about that very important issue.

Anyway – how many kilometres did thinking about that just take, what’s my average speed, Wonder what I’ll eat for dinner, will I see another westerner in the next few days? ……..

Sometimes I don’t just think it, I say it out loud. It gets lonely out there now and again.