Leaving this time felt a bit different I guess coming back after a long period away, spending Christmas at home. Seeing my girls again, family and friends made it harder.
On the plane I started feeling ill. I’ve had a cough for 10 days which was now turning into a headache and cold with more coughing and flu like symptoms , sweating but freezing cold what a great start. I was in bed for 24hrs after arriving back in Hoi An.

I’m staying with my friend Long now and plan to leave in March.
After Christmas at home and lots of drinking, eating and generally gaining weight I was looking forward to getting healthy again. Little did I know that the Vietnamese celebrated the lunar new year quite so hard. TET as it is called here is basically 10 days of drinking and eating from end of Jan until beginning of February. Friends and family gatherings. As I have a lot of Vietnamese friends I got invites to many of these parties some stating at 10am. You were half drunk by midday and then off to another. I managed 4 (I think) one day. 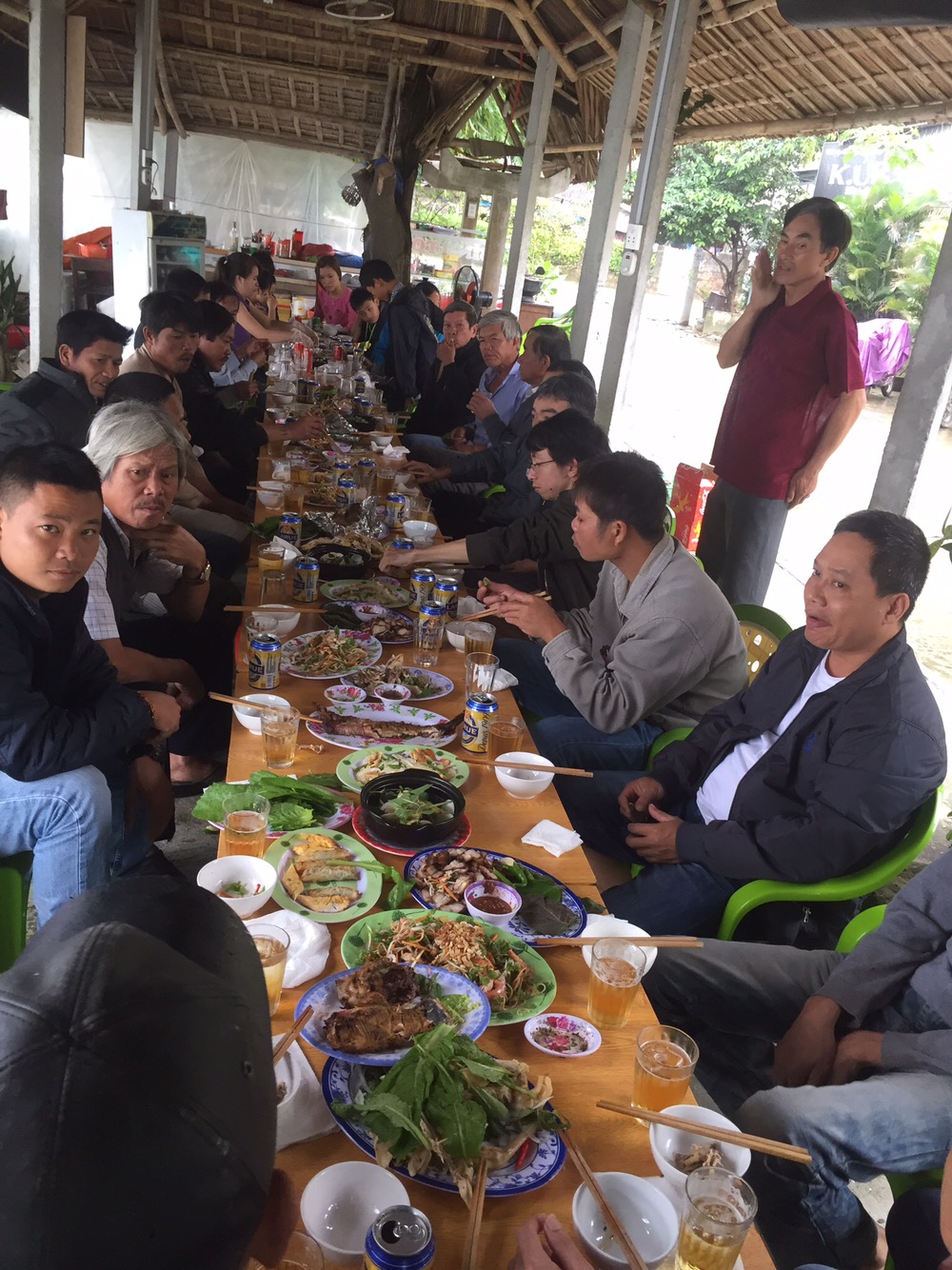 You give small red envelopes to the children with ‘Lucky Money’ inside.
Everyone buys a Kumquat tree. (Looks like a tangerine tree) this brings luck and the fruit represents fertility for the coming year. Good times. 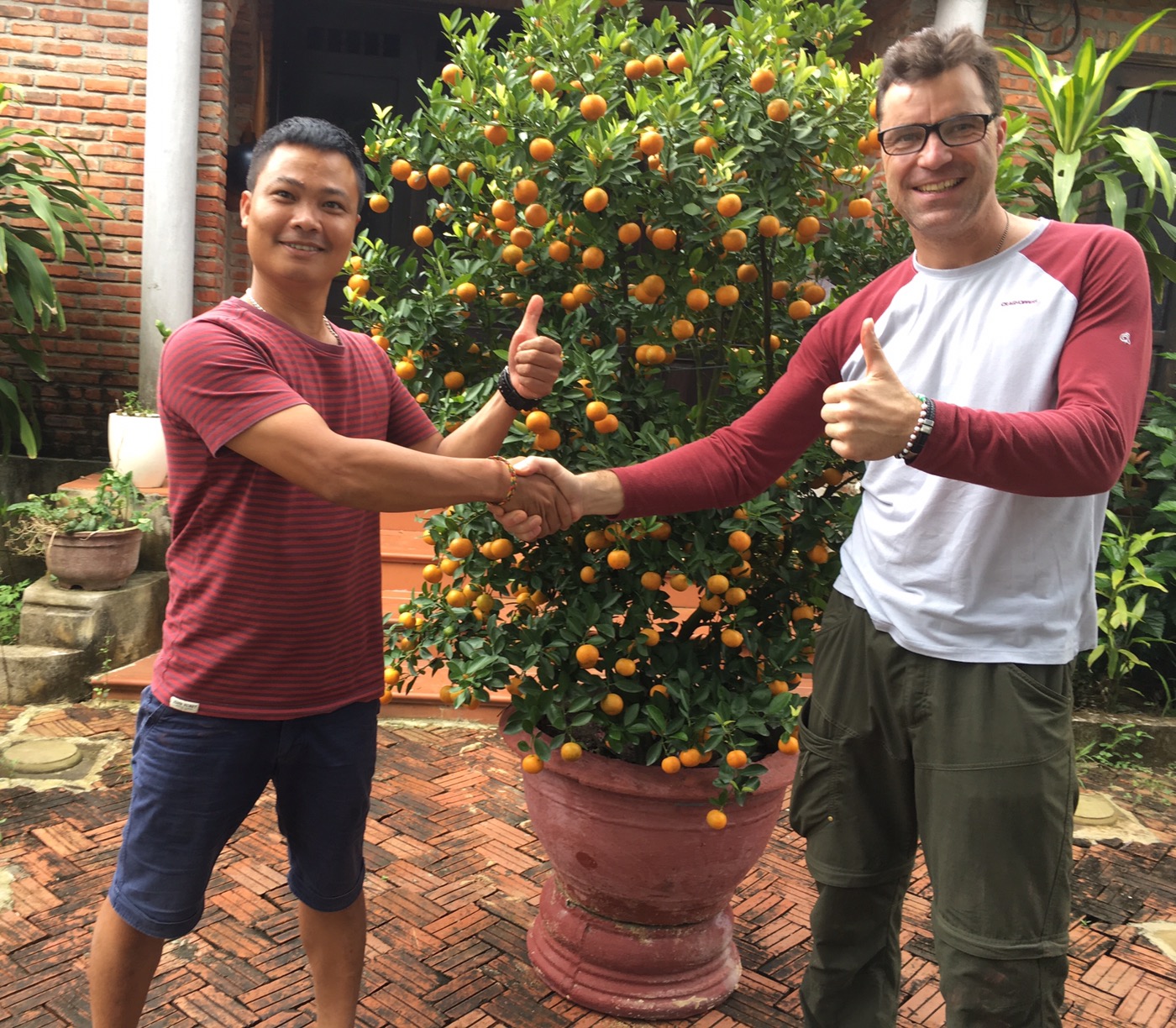 Hoi An old town flooded as it does most years in the wet season. Not helped by the fact that the hydro electric dams up stream end up opening the gates due to the amount of rain that over fills them. Wet season in Hoi An is Dec/Jan. Worth knowing.
At the end of Jan to escape some parties and also as 99% of Vietnam closes down, Long and I decided to ride 500k to see some elephants.

January 29, 2017
67 miles from Hoi An to Khon Duc.
Weather was great and the ride was steady. Ate Pho (noodle soup with beef) for breakfast, Stopped for lunch by a river. Nice easy start. 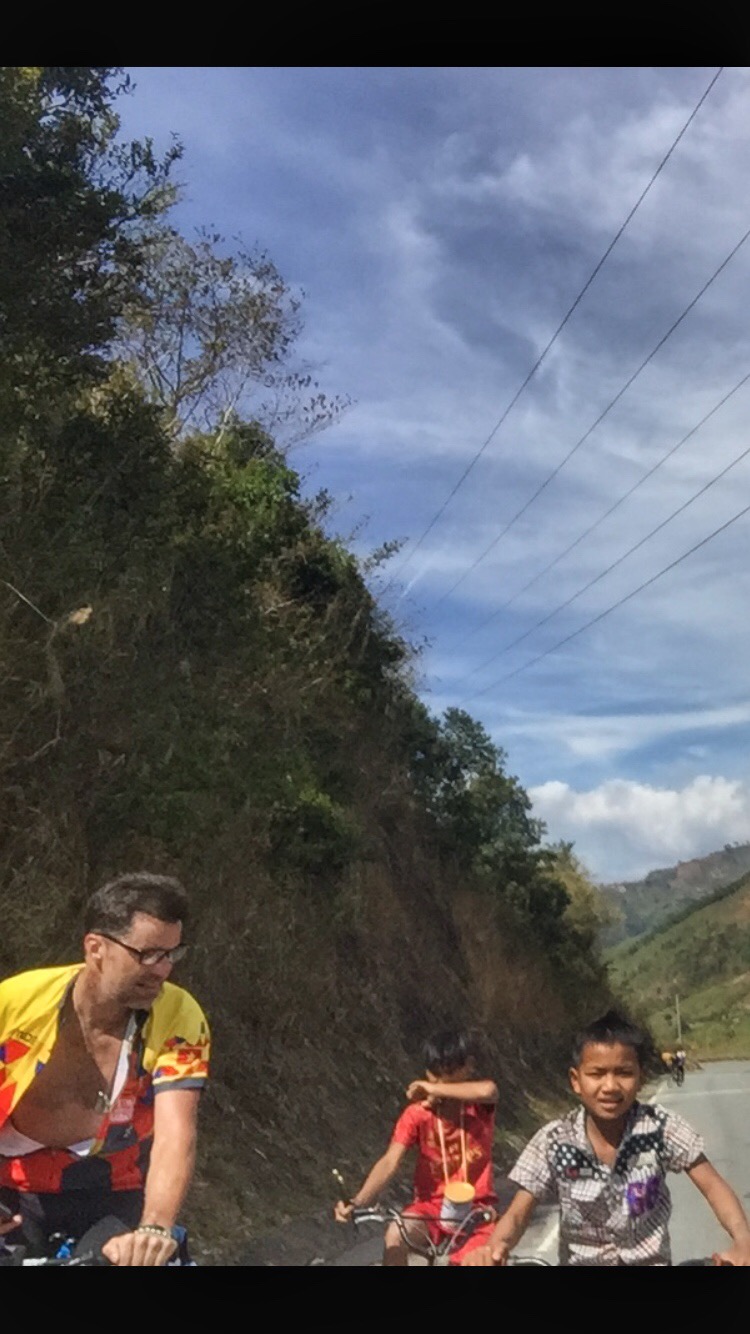 30th January. 70 miles from Khon Duc to Ngoe Hoi. 6000ft of climbing.
Tough day. This is the day I noticed I was carrying all our kit as Long had no fittings on his bike for any sort of rack or carrying device. Had Pho for breakfast and lunch. Saw a big landslide that very almost blocked the road.
We were now way up in the central highlands of Vietnam and it was beautiful.

31 January. 102 miles, 4500ft climbing from Ngoe Hoi to Cho Phu Non.
Pho for breakfast and lunch!
The good weather was still with us and we were both a little burnt. Kind of ok for end of January.
We later learnt that the day after we left it rained for all four days in Hoi An.
Up here in the hills of this area its famous for growing coffee and pepper. Everywhere you looked there were both. Made for some good coffee stops. 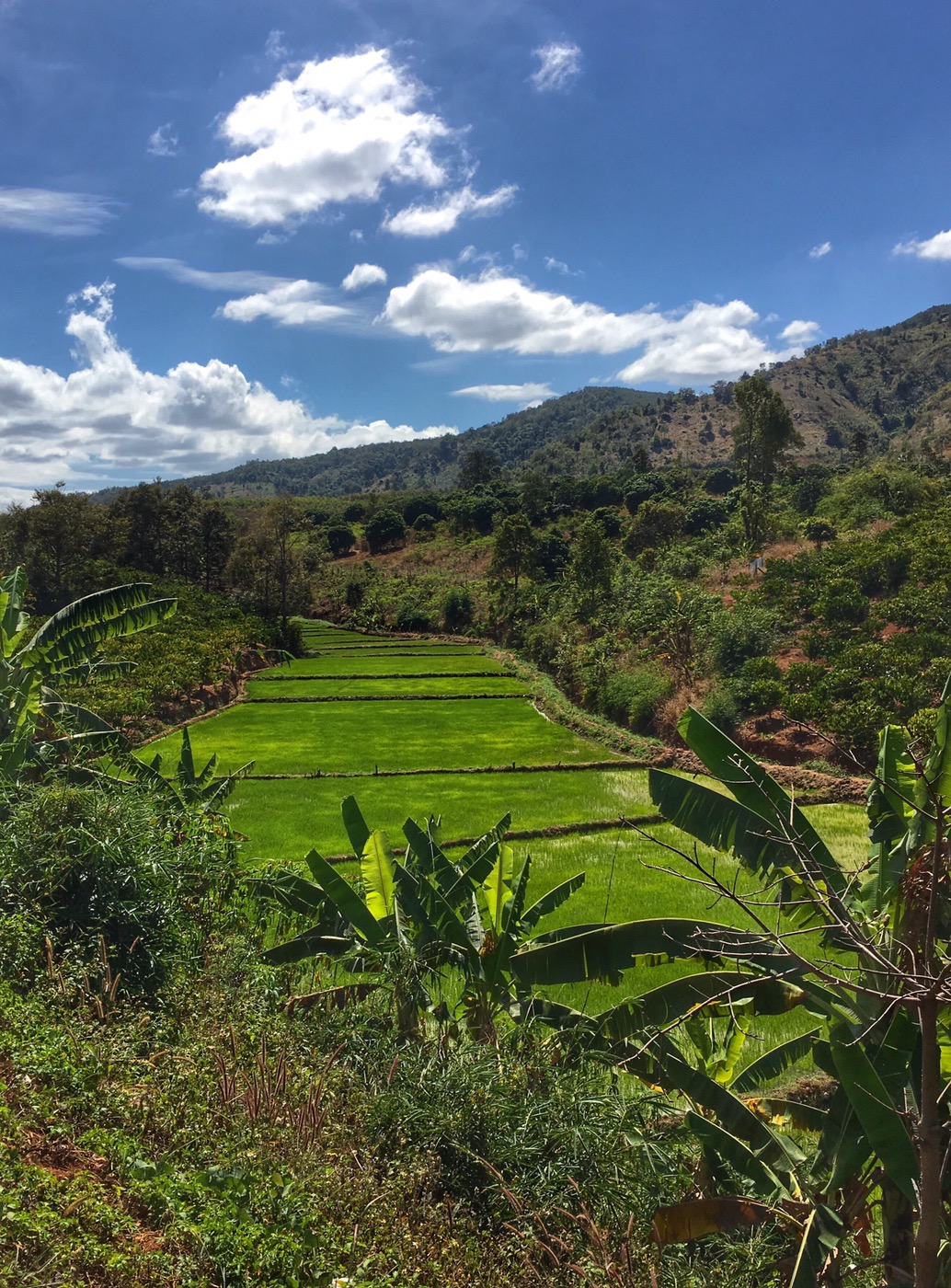 2nd Feb.
Hired scooter to drive to see elephants.
This is the only place in Vietnam you can see them. Not sure either of us were overly excited about seeing them, the ride could have just been to a coffee shop 500k away. Don’t need much of an excuse to go on a bike tour!
Once we arrived we got a small boat which ran aground just before we reached the bank. Long and I jumped out and waded the rest of the way.
It was good to see the elephants purely as we had ridden the distance for just that.
We got the night bus back to Hoi An. 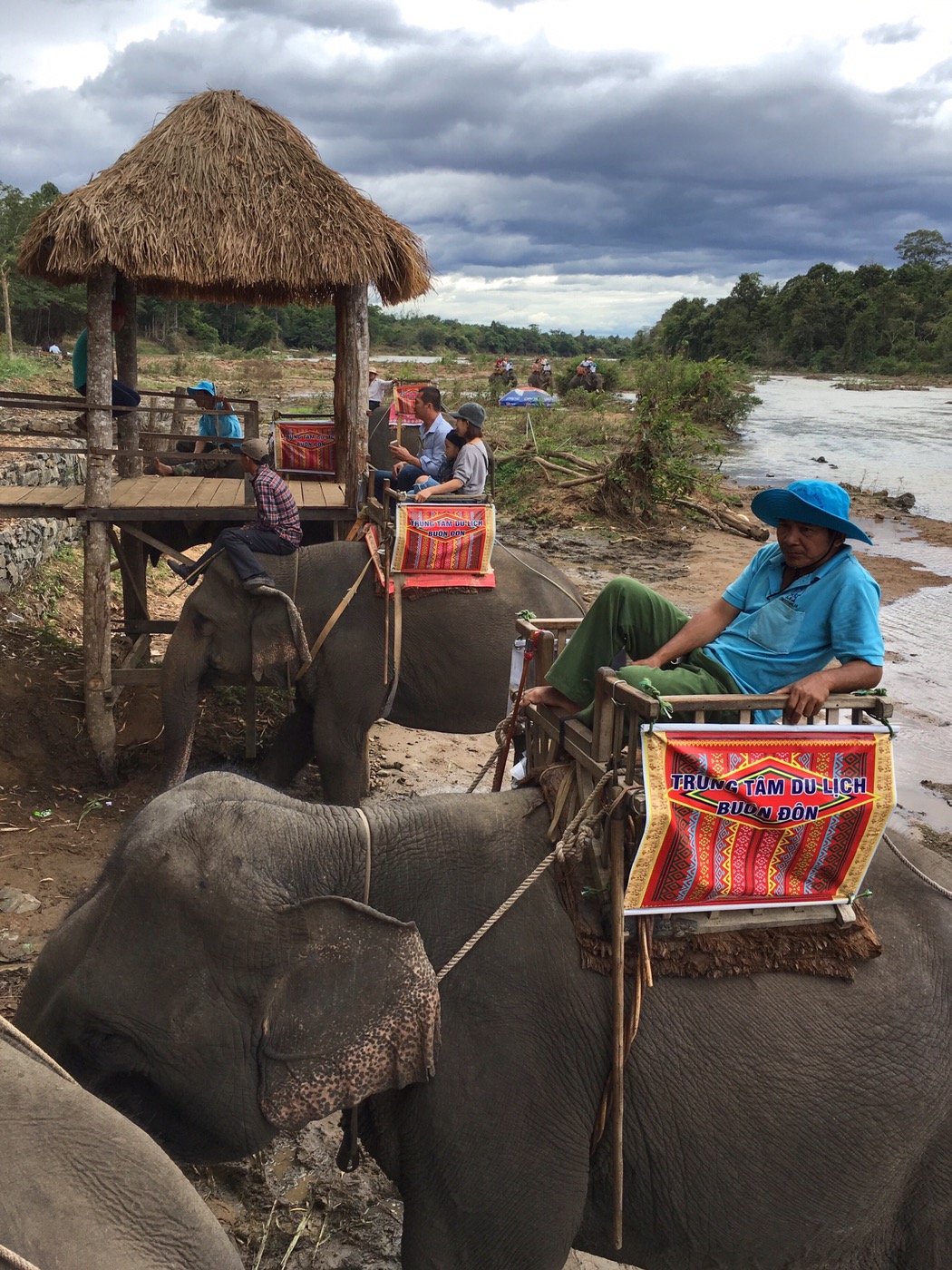 Drove through the rain that we had heard about and rode the last 15k at 4am in the rain back.

In a few weeks I am flying to Bangkok for some serious fishing with my brother. Looking forward to that.