↓
Home Menu ↓
Skip to primary content
Skip to secondary content
Home→Blog→accommodation→To Hoa Binh. Where I will end up for a while longer than intended.

Left Con Cường and had a steady ride to Hoa Binh. Had a rear tyre change along the way. I had stuck a screw or something through my tire a month or so ago, you may remember in a previous blog. I patched the tire from the inside when it happened, it was quite a large hole and 1500 miles later the grit finally wore through and put a small hole in my rear tube. The picture below shows the difference between the old tire and the brand-new tire I thought that was good going for a rear tyre after nearly 2500 miles with almost 150kg of weight bearing down upon it, good quality WTB tyres!  I kept the old one as a spare. There is a few hundred miles in it if I get into some serious trouble with one of the other two tyres. 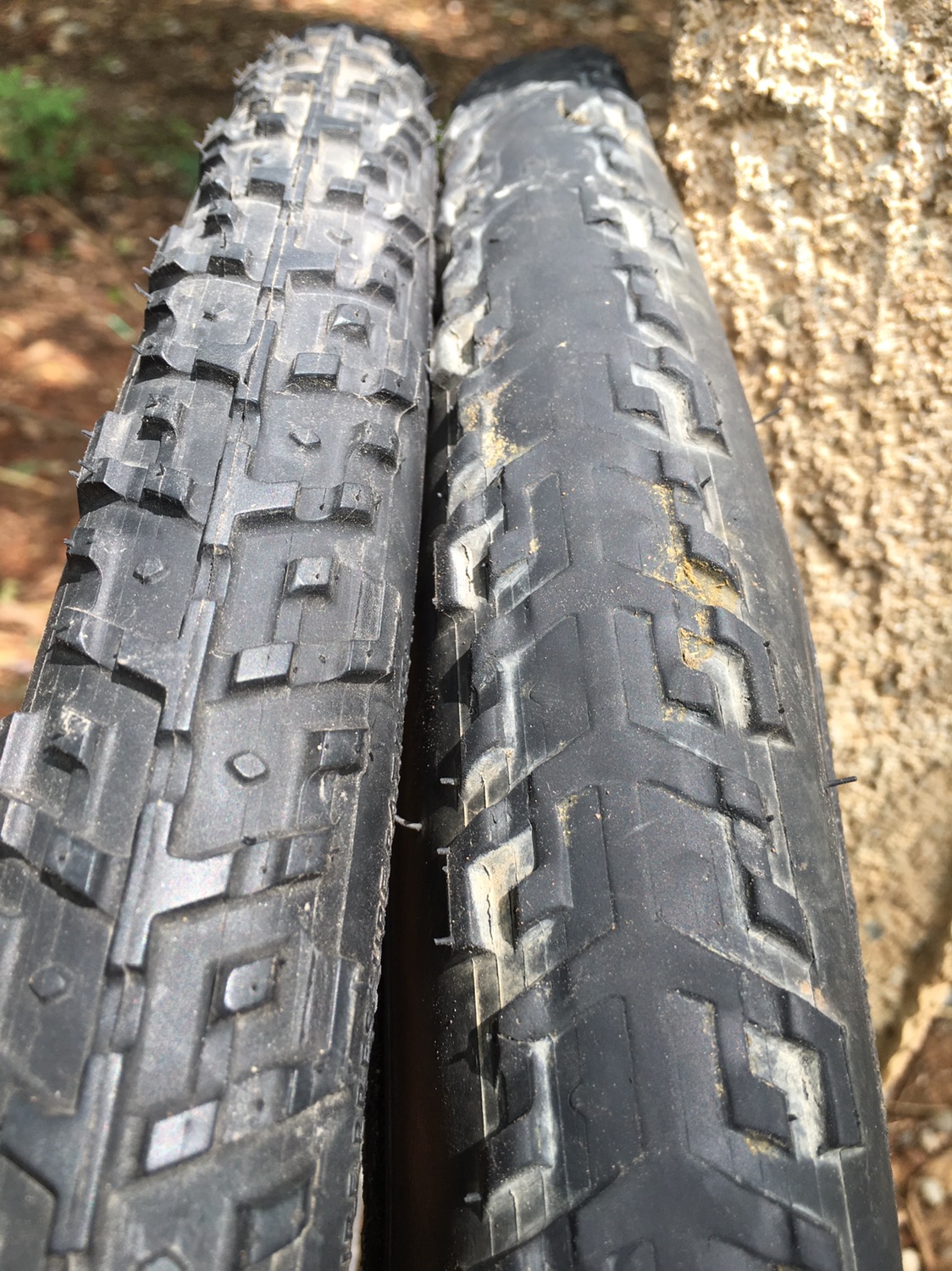 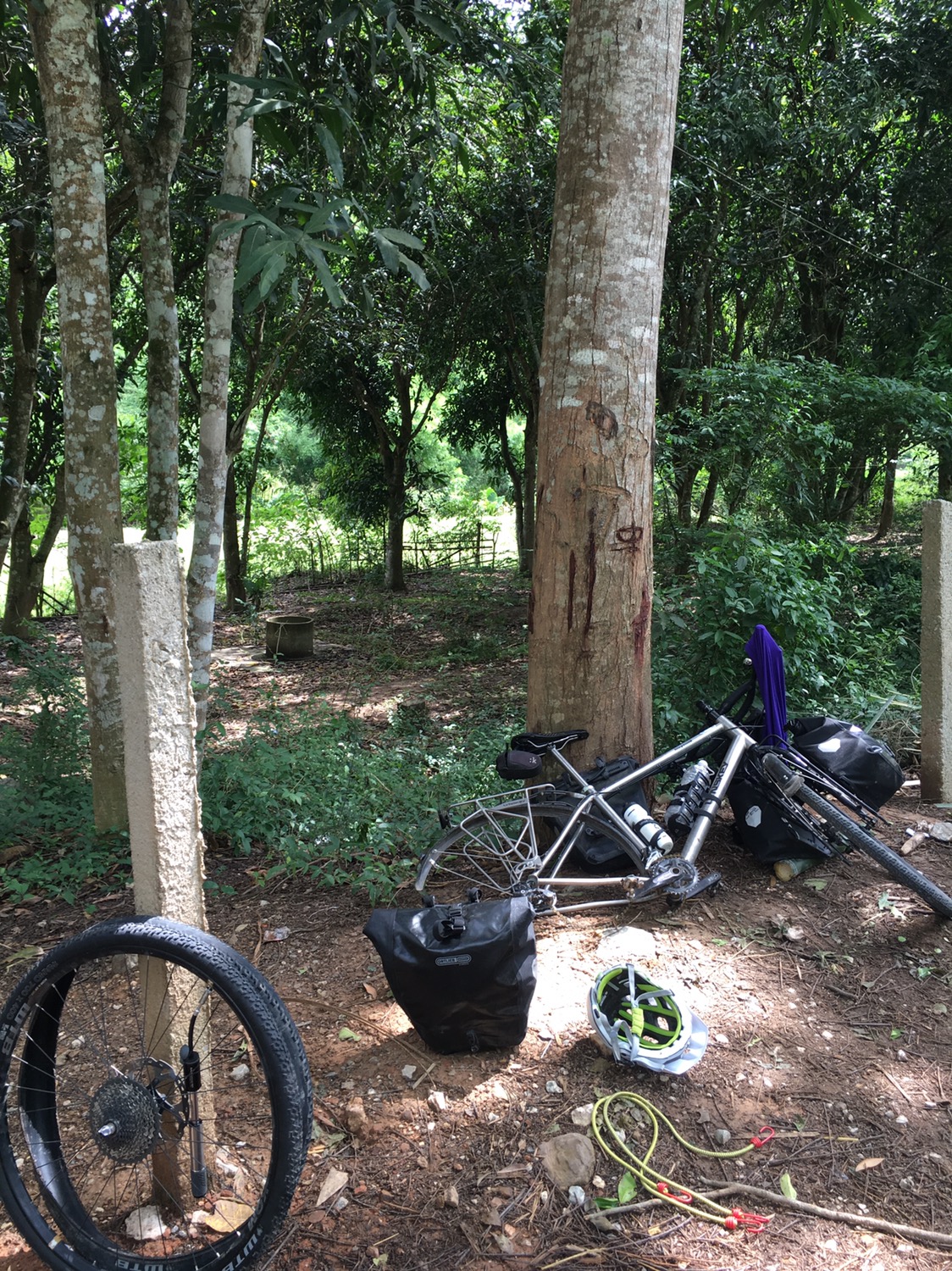 I reached Hoa Binh about 3:30 – 4 o’clock and checked into a hotel it looked quite nice. I wanted the cheapest room they had (250000 VMD. £8) which was right on the top floor and actually quite standard but it did have a fridge and air-conditioning. 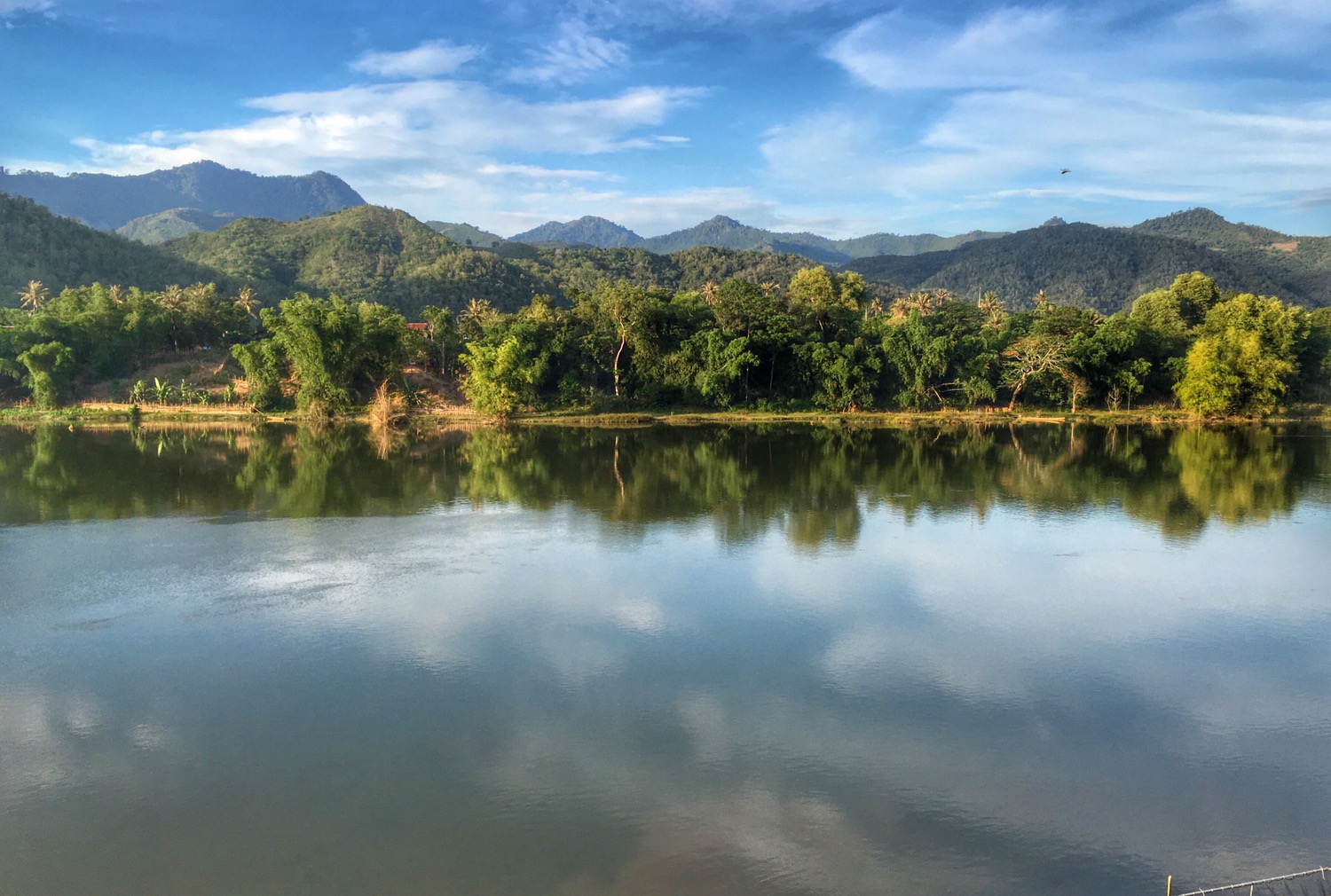 That evening a swarm of killer bees was trying to get in through my broken window a few of them did get in as the window would not shut properly about 10 made it through it made a change from killing mosquitoes. It was a bit odd killing honeybees but they were going crazy stinging everything including themselves, obviously when bees sting they die so they were dead bees piling up outside the window. Then the Wi-Fi went down and the TV stopped working I got discount on the room the next morning so now I only paying 200,000 Vietnamese dong about £6. 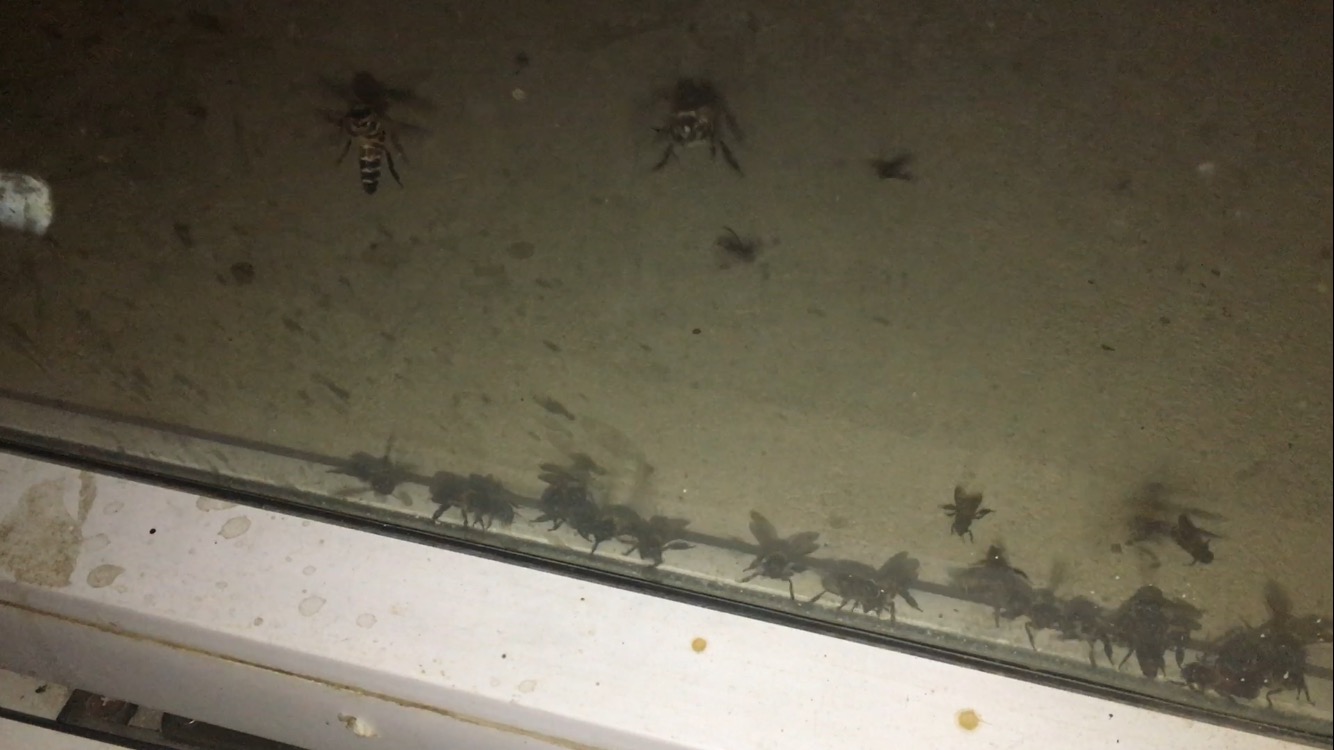 The plan was to stay here for two days and recover well and get back to it however I met a teacher, Mr T pronounced Tay Who asked me to attend his English class he said the kids would love it, just tonight for two hours so…… four days later and I’m still here teaching the local children English. I have a trip planned to Vinh City tonight (Saturday 28 May) getting back Tuesday, to teach a much bigger school in the city the school in the city wants to pay me including expenses I have agreed to do this and with the money I earn I can pay my hotel bill here in Hoa Binh and teach the kids here in the much poorer mountain village for free until I leave for Laos on Friday 3 June. They’re trying to keep me here a month but I must finish my trip. Well At least get to Nepal and Everest. 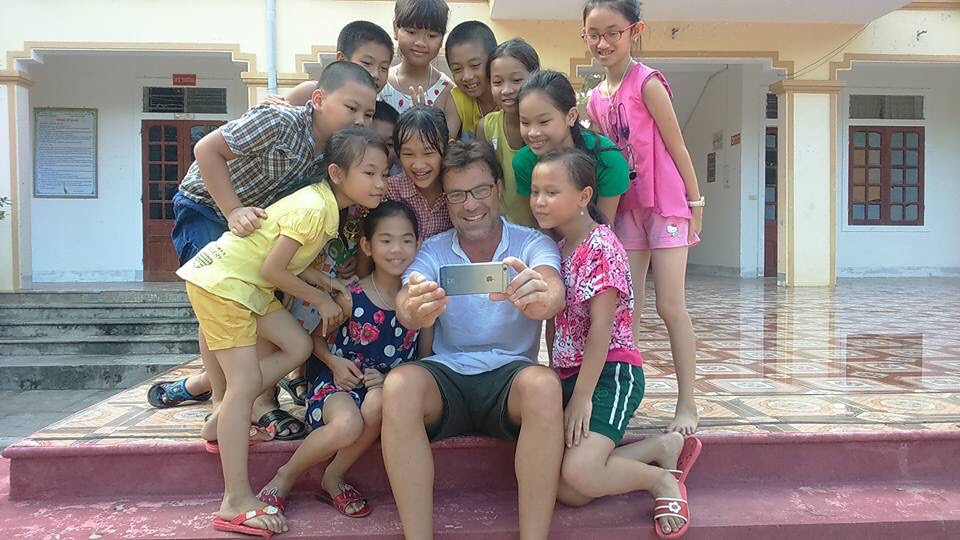 Left for Vinh on a small bus along bumpy roads at 10pm. It’s a 4 hour trip so arrived at 2am. Grabbed 4 hours sleep then spoke to children in about 9 different classes until 9pm. The principal (Chung Kieu) looked after me well. She took me round Vinh City and to some great food spots. It was a busy few days but it went well. 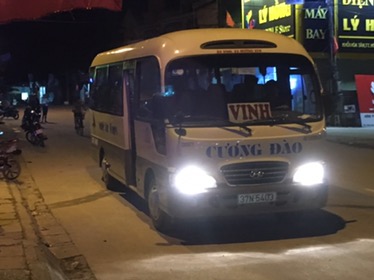 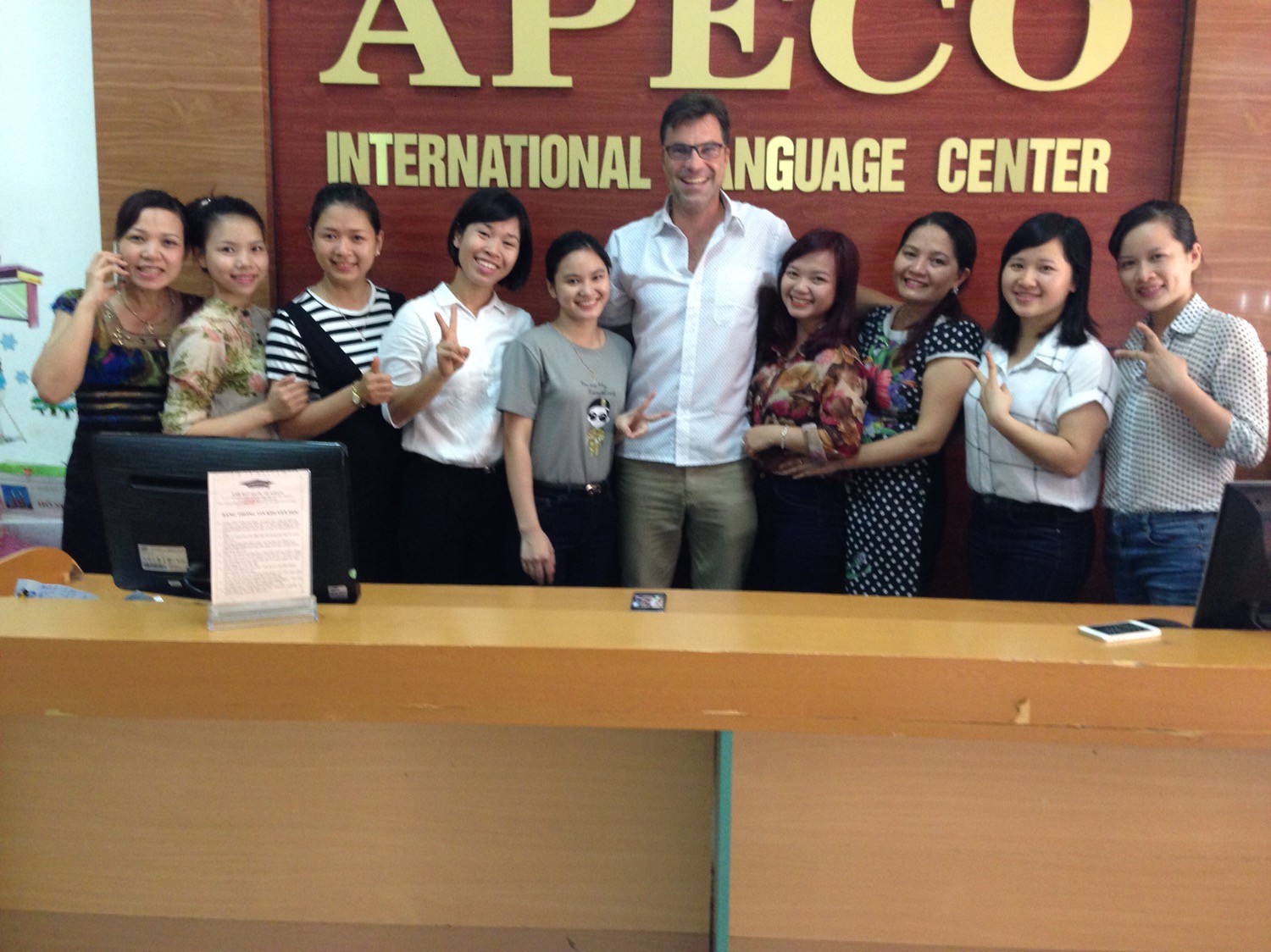 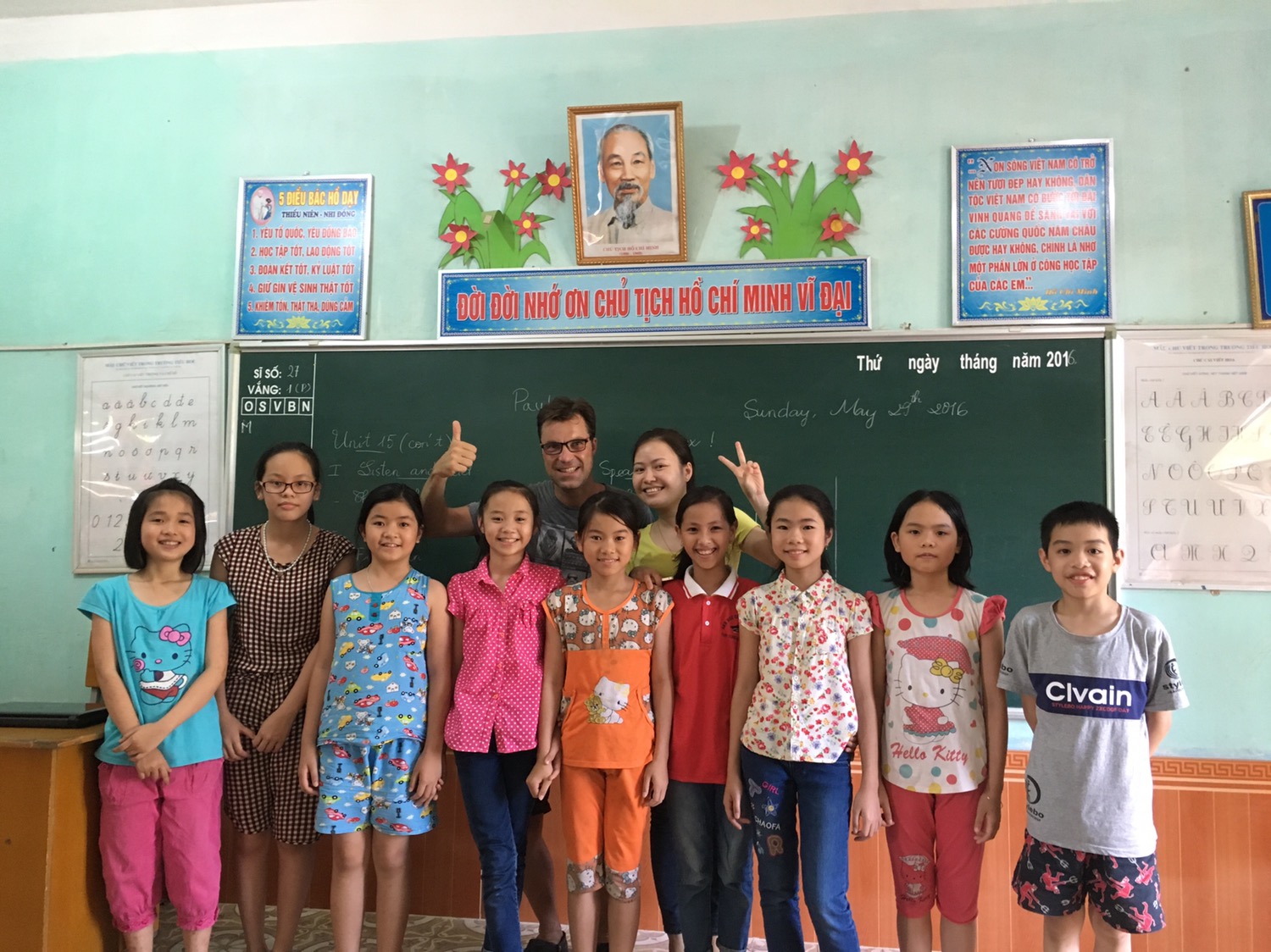 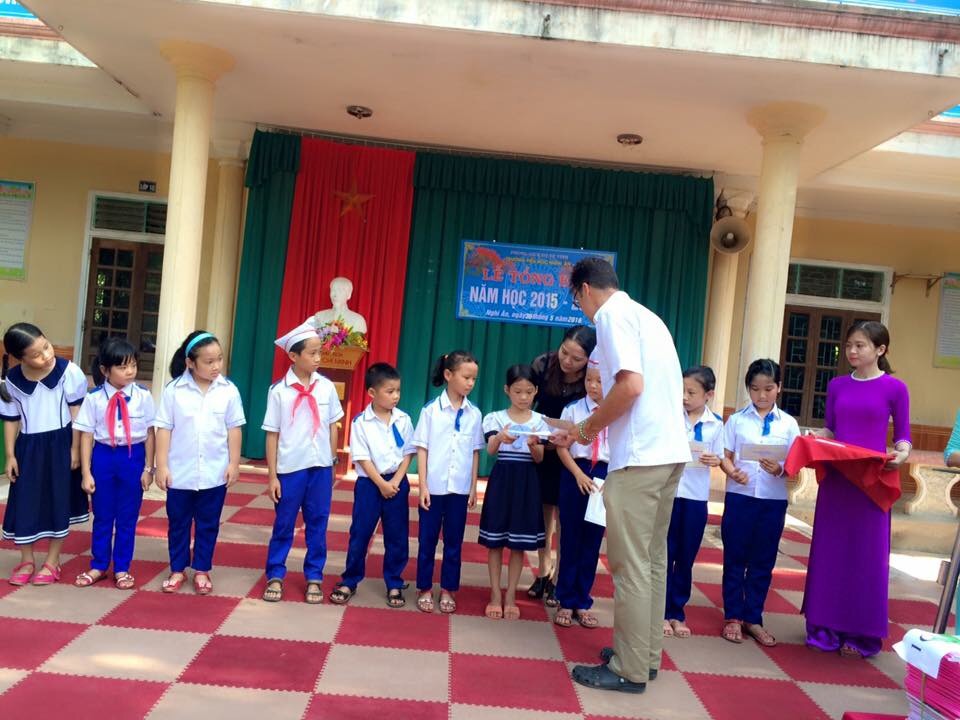 I gave out some awards for achieving a high standard in English and headed back on the bus to Hoa Binh. I was due to leave Friday the 3rd June but discovered my bike had fallen in the night and smashed my front brake lever. I ordered a new one on line as nowhere in Vietnam had anything. I’m still waiting for it to arrive. Hopefully 3 more days. My visa runs out on the 13th so it’s cutting it close! 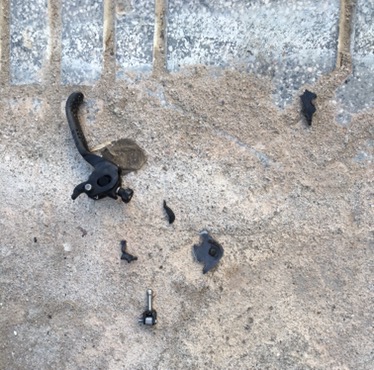 The kids at school made me lots of presents and letters to say good bye. Good luck and thank you. 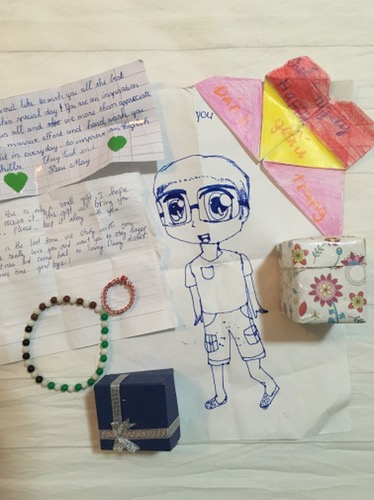 Mainly been chilling and drinking whilst waiting. Keen to get back on the bike again. That’s it for now. All up to date. It will be a few days until next post. 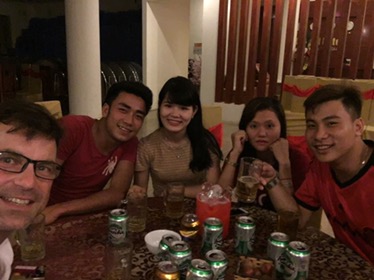 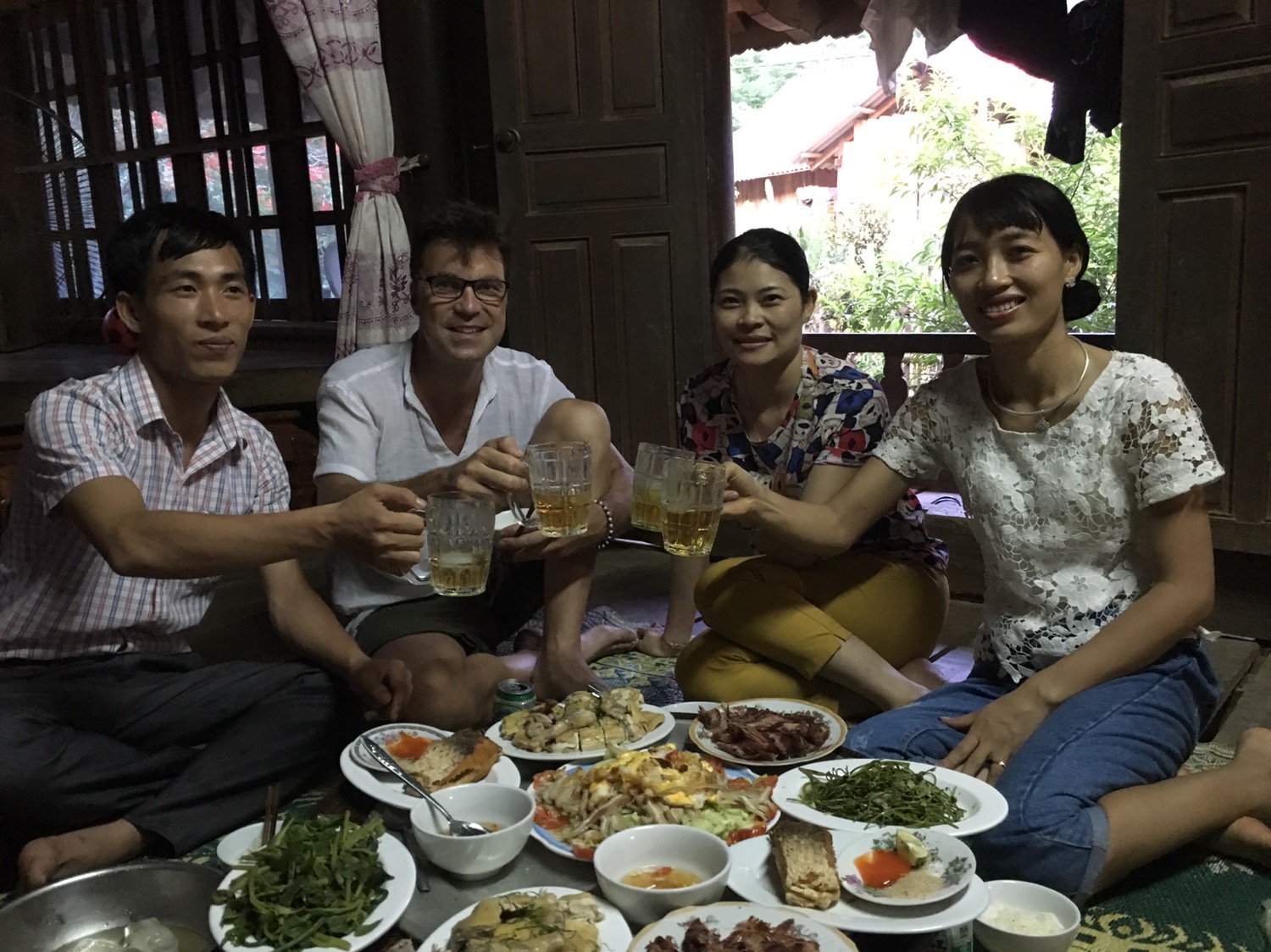 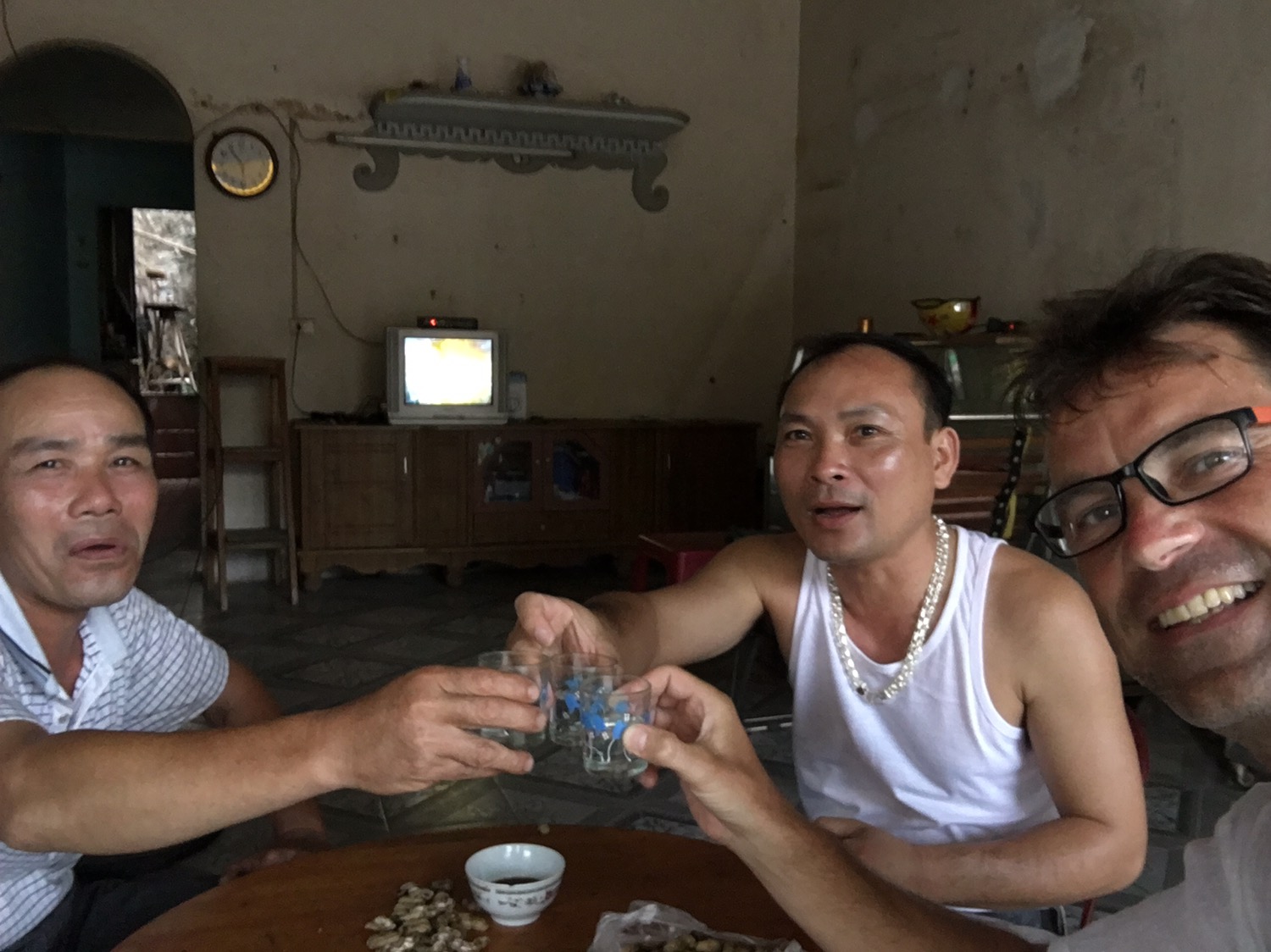 Whilst having a drink one night this chap walked in unseen and started climbing up the leg of the guy sat next to me. If you have read my previous blogs you will know a bite from these boys will be a problem. Pain for days!  Zoom in. You can see the fat jaws full of venom. Bit of excitement anyway. 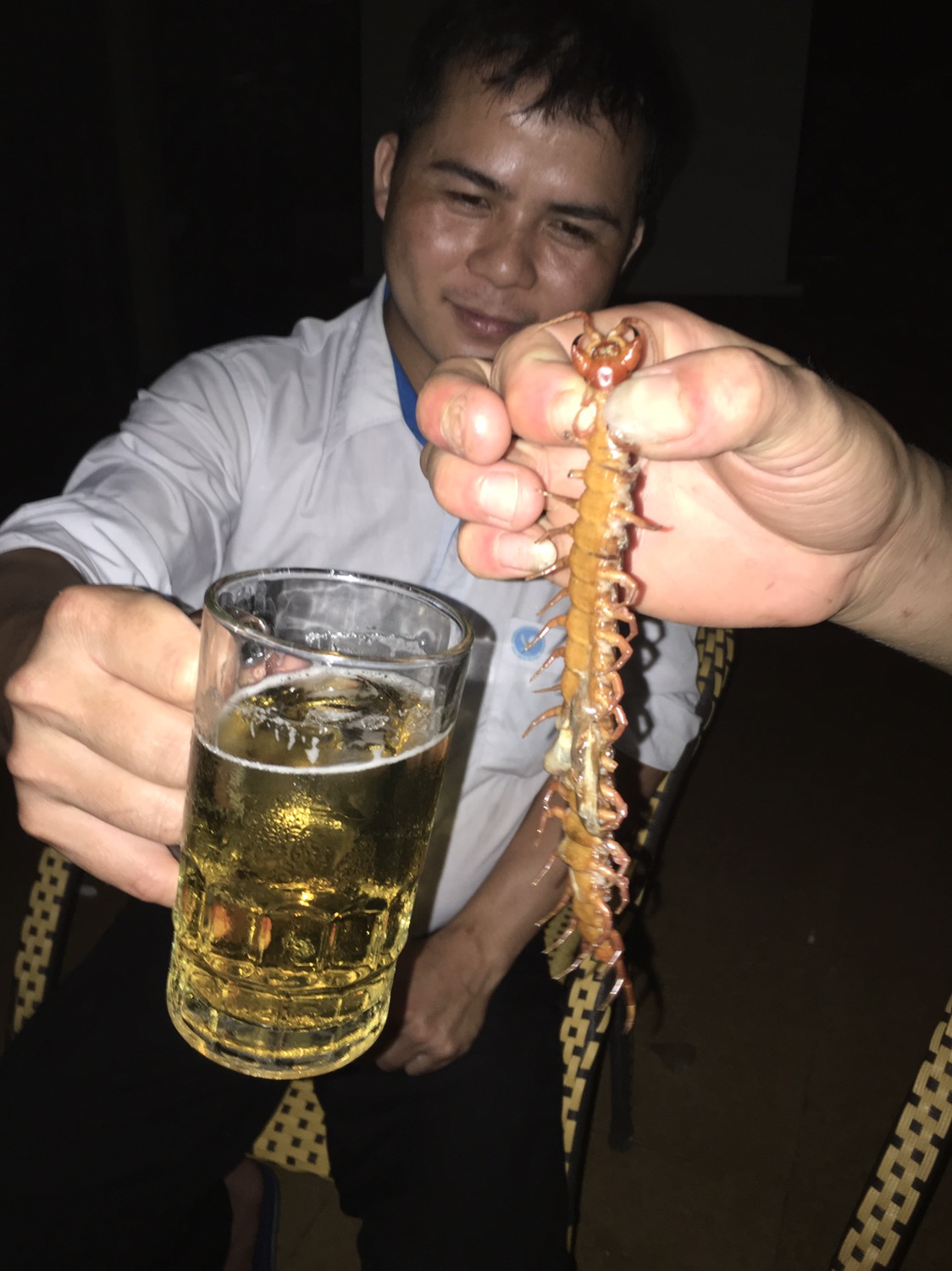 Check out my videos on http://paullasenby.com/